Vectors aren't only the domain of Illustrator. Photoshop is quite adept at creating beautiful resolution-independant scalable graphics.

Photoshop is fundamentally a pixel-based application, but it is very adept at working with vectors. In fact, there are really partial Illustrator capabilities built right into Photoshop. Vector shapes created in Photoshop print as well as those in Illustrator. The benefits of vectors is their accuracy and defined edges. They’re also infinitely tranformable in a non-destructive manner. 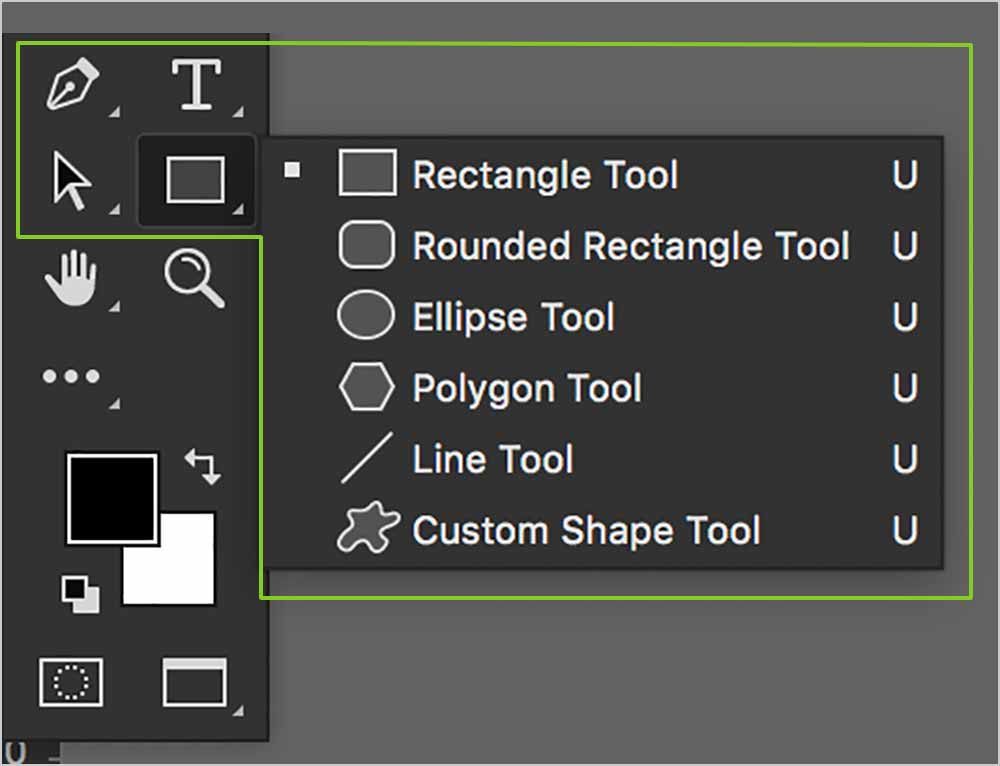 The tools shown above are similar to the ones found in Illustrator. They’re all vector tools.

There are three shape mode described below. When you select either of these tools, the options bar has settings for them.

Shape layers behave a lot like shapes in Illustrator. They’re created on separate layers. They can be created with the various shape tools or you can draw your own with the Pen Tool.

Vector shapes in Photoshop are made of two parts. There’s a fill layer which houses the colour and a vector mask which dictates where the colour appears.

Path mode draws a vector with no stoke by default. A path alone is not tied to a particular layer. An un-named path is called a Work Path. You can see them in the Paths panel.

You can use the shape tools in Photoshop to use fill pixels. They’re not vector, so they really have no place here. They’re Photoshop raster shape tools. They paint right on the current layer. There’s no vectors involved at all, so let’s stop talking about them. 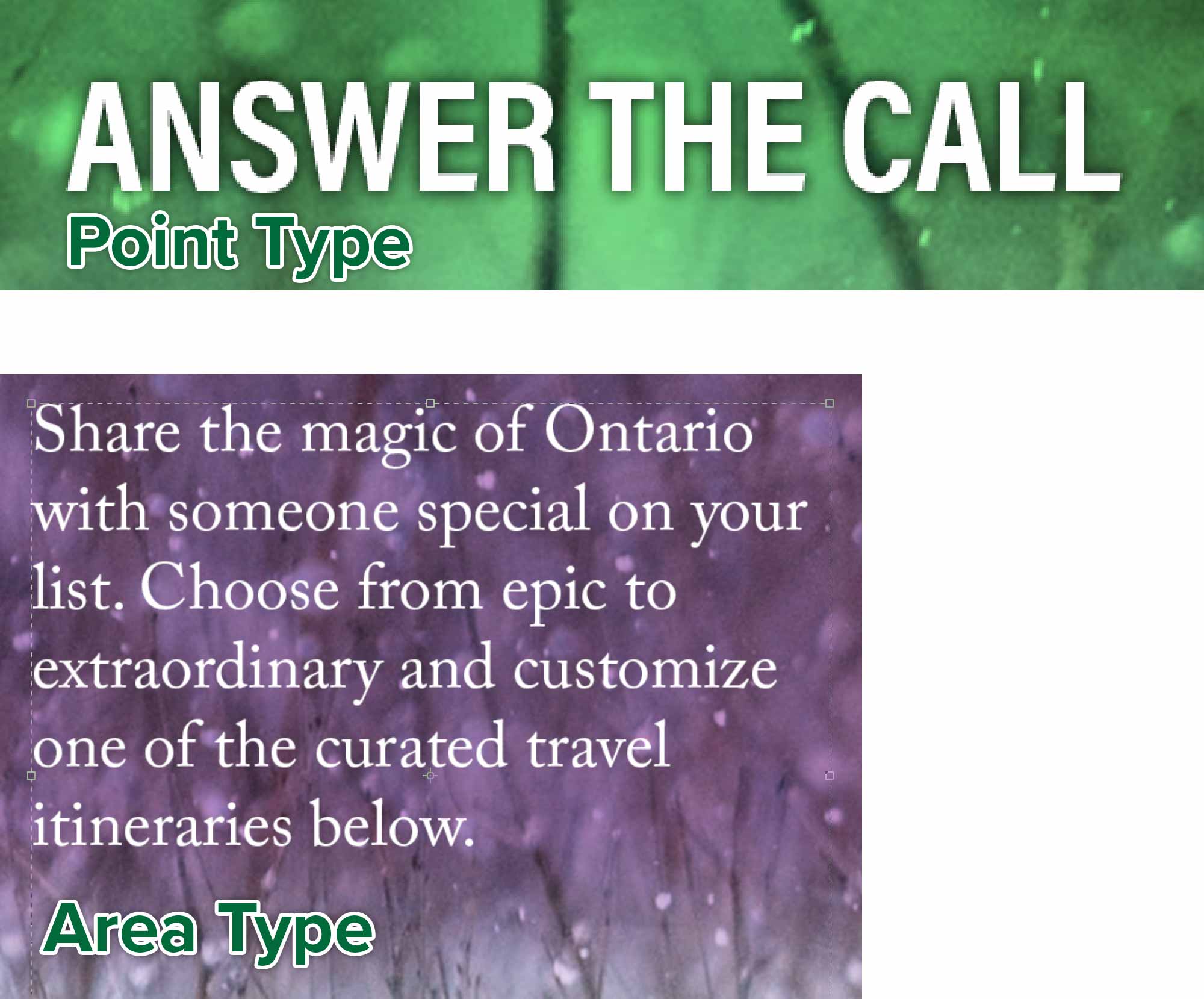 Make sure you default to Point Type. Most of the time, you just click and type with the type tool. The only time you drag a text box is when you have a paragraph of text.

When printing from Photoshop to a PostScript printer like the ones we have our classrooms or at the Print Shop, you will be printing the vector shapes. This means they’ll be as sharp as the printer can print them. 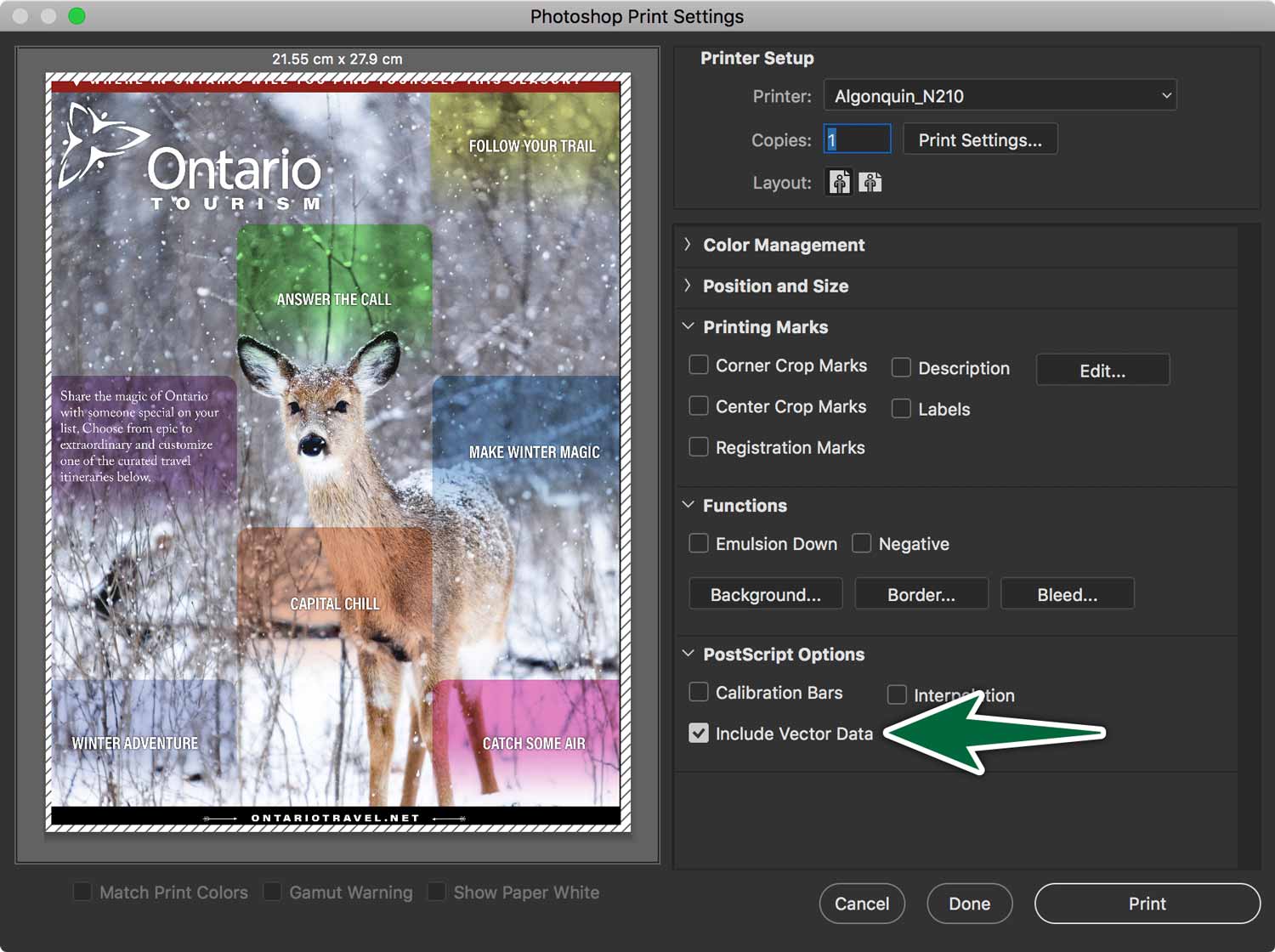 Printing a .psd from InDesign

When you place a layered Photoshop file which contains vector data in InDesign, vectors get rasterized when they print, which is really too bad. The trick to get around this is to save your native .psd as a Photoshop PDF file. Place that PDF if InDesign, then the vectors will print as vectors. 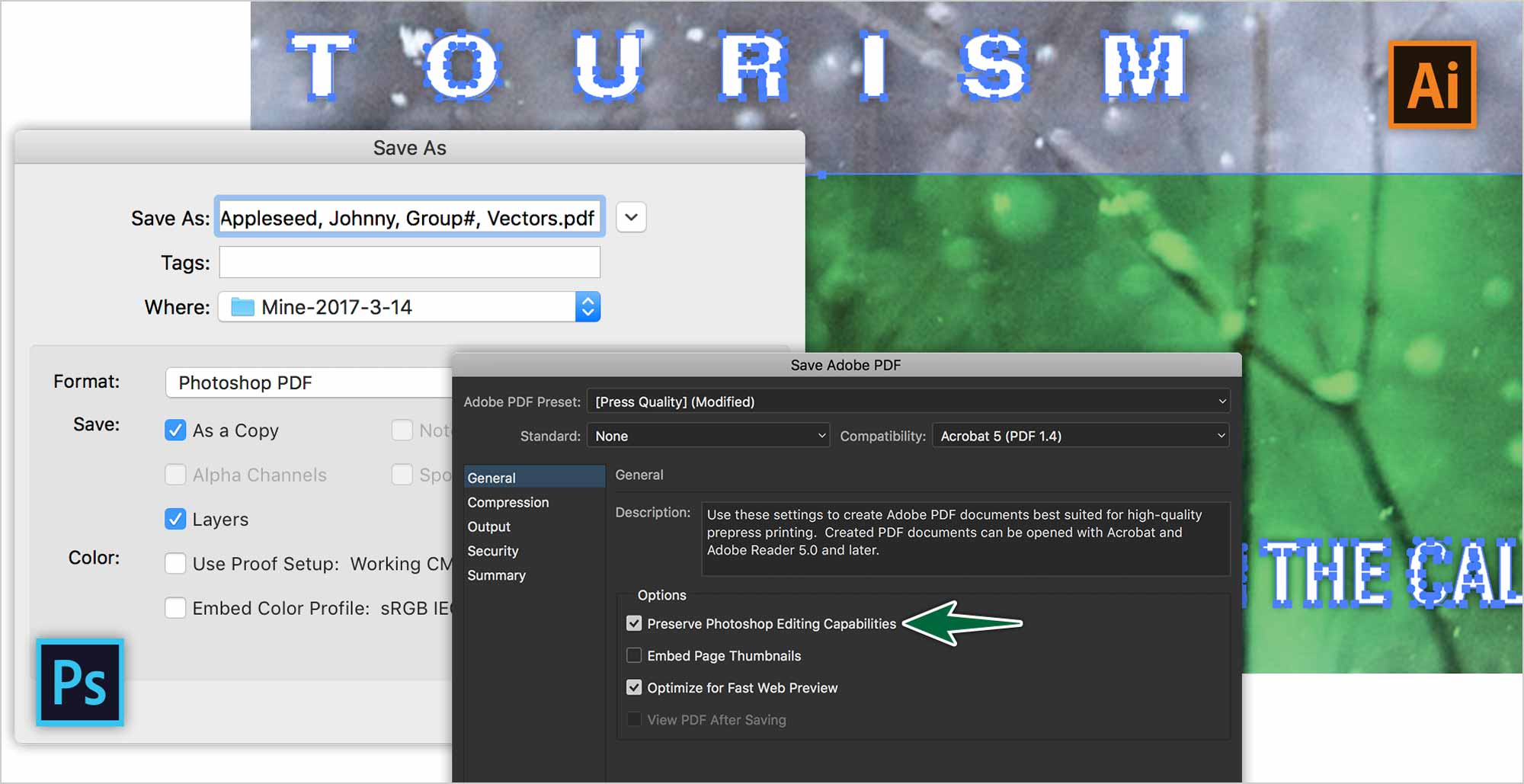 What’s shown above is the file saved as a PDF. As a test, the resulting PDF file was opened in Illustrator. As you can see, the vector shapes from Photoshop are selectable in Illustrator. This means that if they were printed on a PostScript printer, they’ll print as vectors, as clearly as possible.

We’re going to focus on the five main vector shape tools, plus the Custom Shape Tool. The tools behave similarly to those in Illustrator. While drawing with them, you can Shift-drag, Option-drag and Option-Shift drag to constrain proportions and draw from the center. 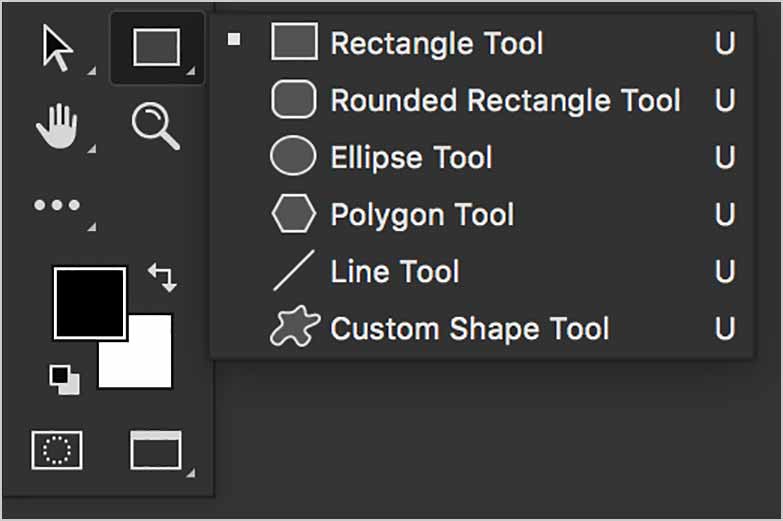 The default behaviour creates a new layer each time you draw a shape. You do have the option to combine or intersect shapes as you draw, with options in the Control Panel. 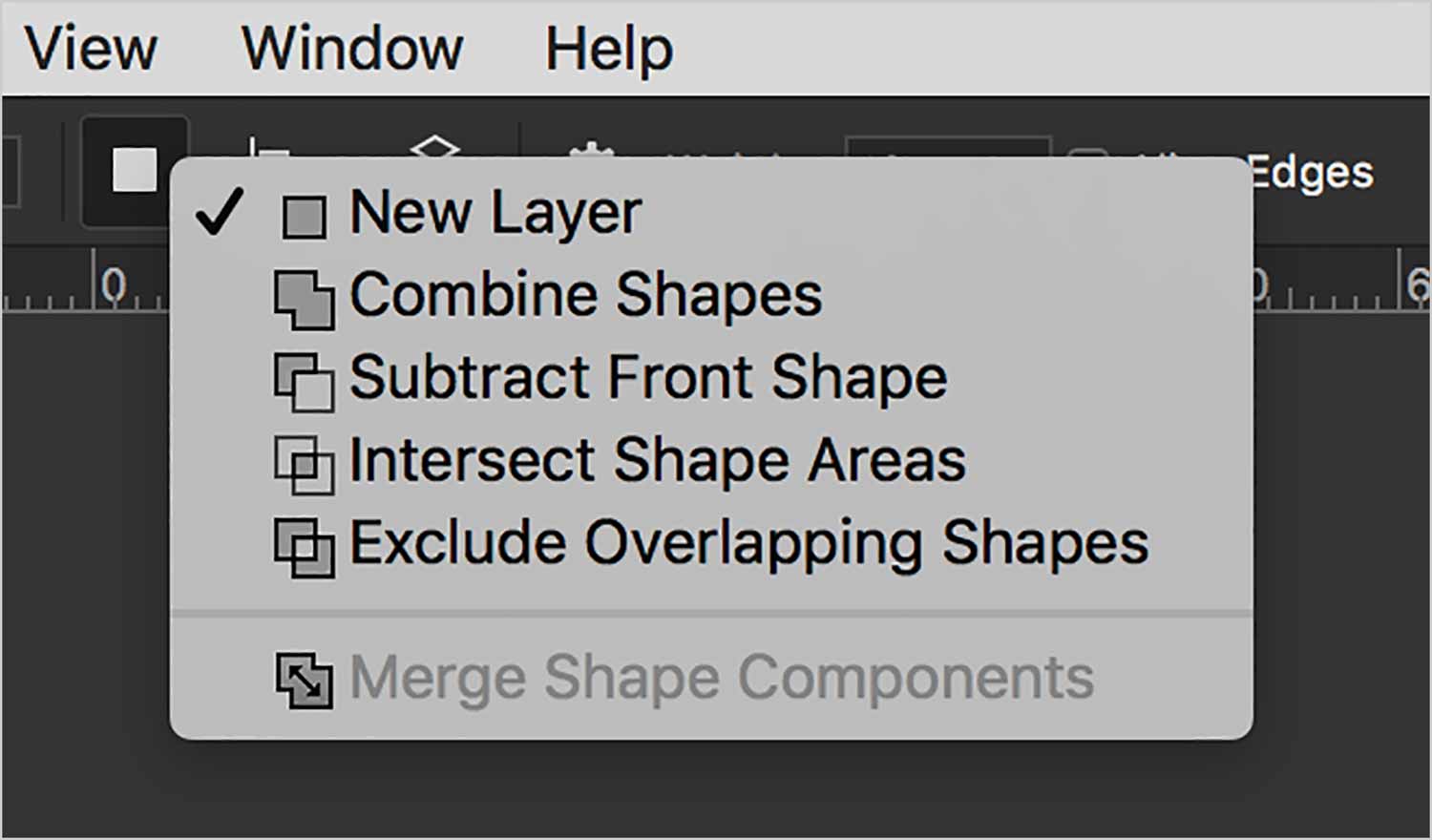 Let’s create the layout below. It mixes photography with vector shapes and typography. 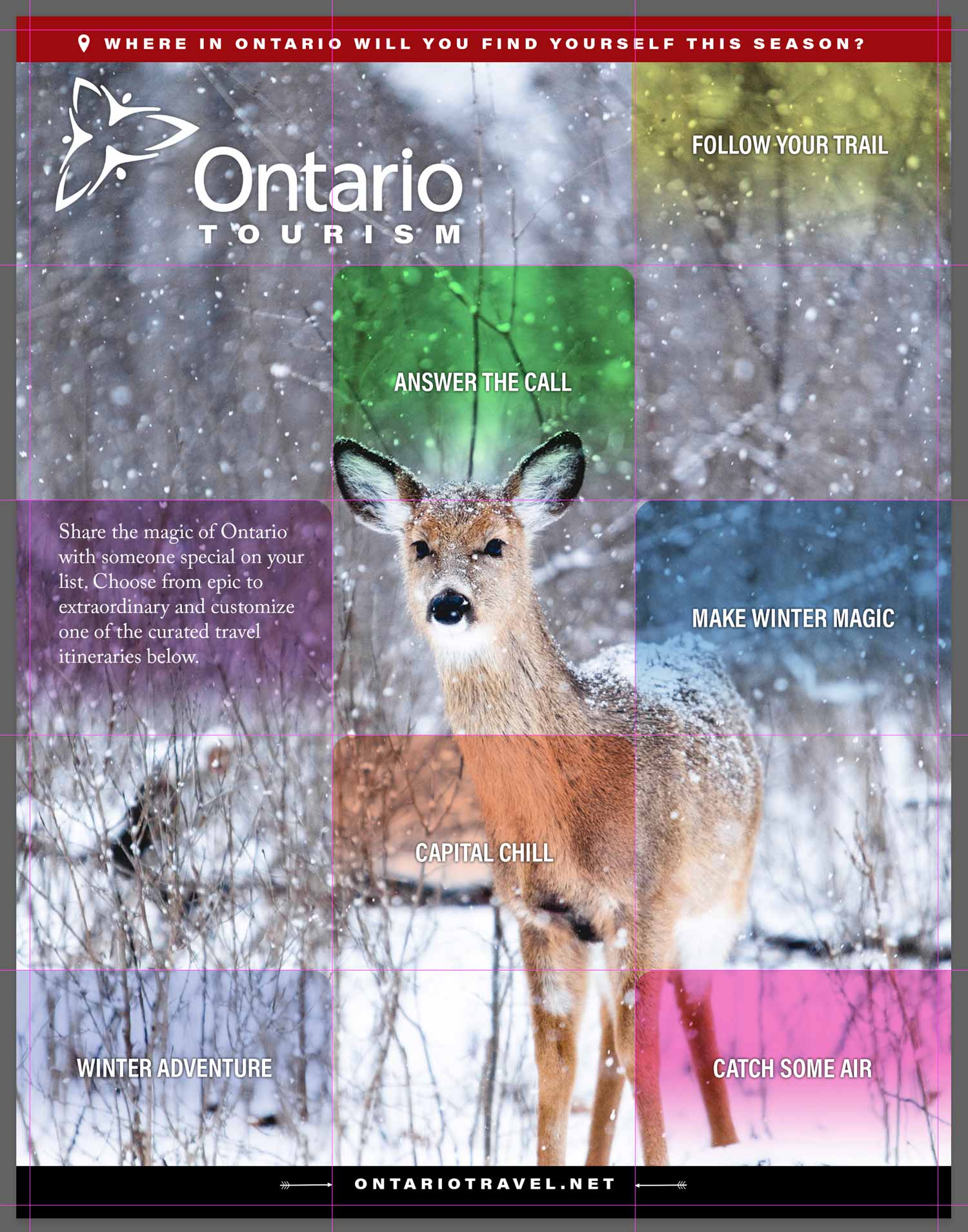 You can draw pixel-based layer masks on vector shapes. This will make them translucent.

Vector shapes can be feathered. Use the Properties panel’s Masks tab to edit the vector shape’s options.

Blend modes introduce beautiful raster/vector interactions. Experiment with blend modes on a vector shape on top of a photograph. You’ll see that the shape interacts naturally with the content underneath.

Use Illustrator to create your own shape. Paste it into Photoshop as a Shape Layer. Go Edit > Define Custom Shape. Name your shape. It will then be available to use with the Custom Shape tool.

Go to Unsplash. Find a photo with a strong theme to use as a background for a magazine cover. The choice of theme is up to you.

To get your photo into the canvas, either drag the images’s icon into Photoshop from the Finder, or use File > Place Embedded…. Make sure to name all of your layers.

Make your own original design, don’t create one that looks like the practice file.

From there on in, the rest of the content must be vector. It needs to have:

This is the format for your exercise: 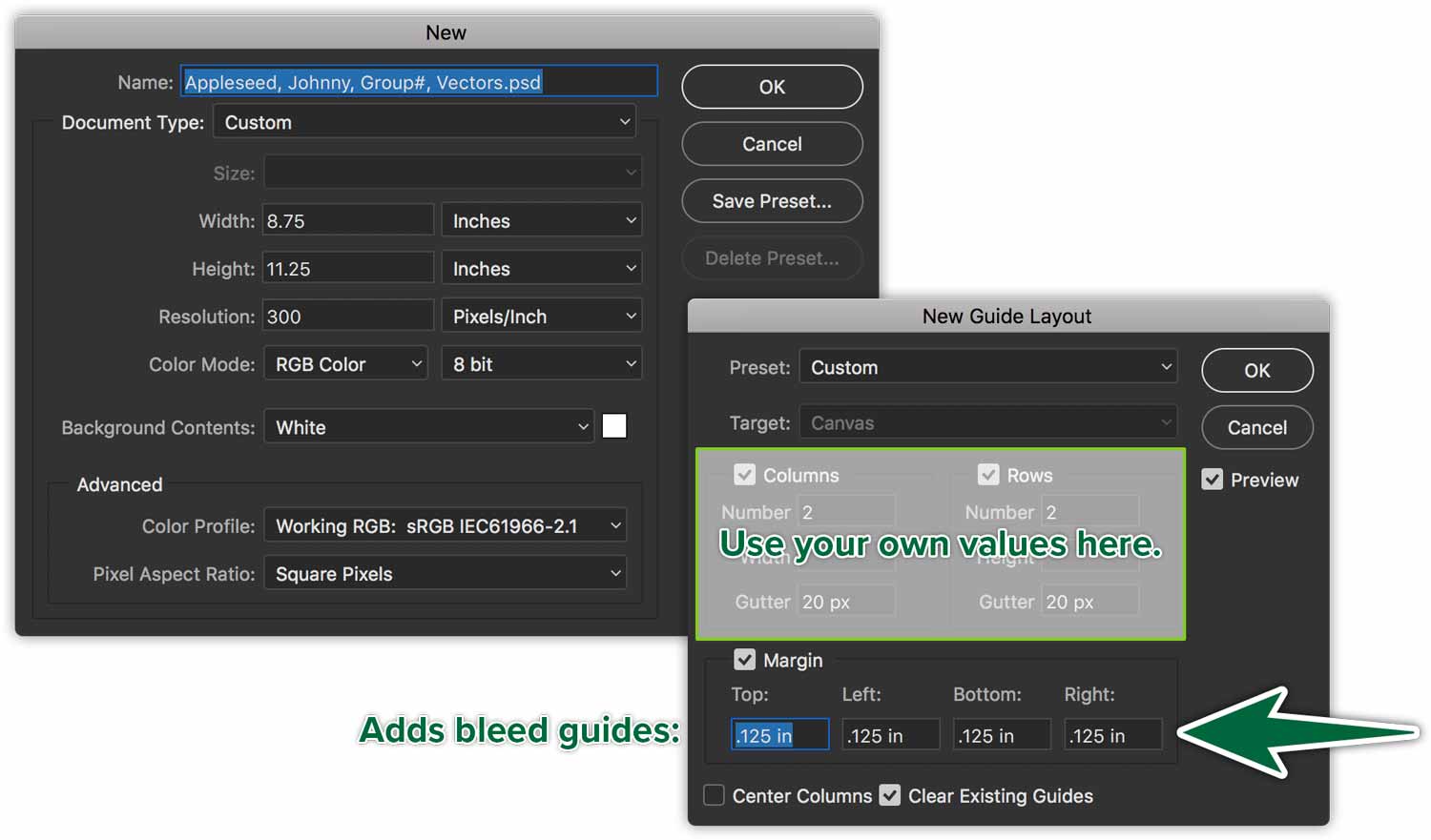 Combining solid vector shapes and photography can result in an overly heavy, bright, coarse design. Make sure you’re subtle with colours and type. Special attention to detail is in order here. Create a grid and stick to it. Once you’re done, without seeing actual guides, your grid should be apparent in your layout.

As for type treatment, choose one sans-serif and one serif from Adobe Fonts. Be conservative here. Better with a safe font selection than something too wild. Font families with multiple weights would come in handy.

Save your Photoshop file as LastName-FirstName-Group-Nº-Assignment-Name.

Zip-compress the Photoshop file, then submit it on BrightSpace.