The Appearance Panel contains each element of a graphic, including strokes, fills, effects and more. It should be on your screen at all times. Use it for all your stylin'.

Artwork in Illustrator can have solid fills, gradient fills, pattern fills, solid strokes, gradient strokes, transparency, etc… All these attributes combined make up the artwork’s appearance. We should apply these attributes using the Appearance panel. This gives us one place to see and to edit all the object’s attributes.

The Appearance Panel should be open at all times while you’re working in Illustrator. It actually saves screen space to keep it open, because other panels are included within it. The Stroke Panel is a good example. There’s a complete Stoke panel inside the Appearance panel.

Whenever you have something selected in Illustrator, the Object Type Indicator displays what type of object it is.

In the image above, you can see that Illustrator treats selected characters as a type of object and point type as a different kind of object. One is called Characters and one is called Type. Well, all attributes in Illustrator can be targeted for styling. Some of the various object types include:

In the image below, the layer is targeted, then the blue fill and stroke is applied. This gives this appearance to everything on the layer. You can achieve the same effect by grouping the shapes, then targeting the group for styling.

The Appearance Panel also controls the opacity and blends modes for each attribute of your object. So you can set a stroke to have a 50% opacity on an object with a solid fill.

You can also change the blend mode of that attribute.

There are some effects which are pixel-based. Note that when you use a pixel-based effects, the settings are dependant on the resolution of the file. Your Illustrator document’s resolution settings are set from Effects > Document Raster Effects Settings….

A reapeating pattern is based on a transparent tile behind your artwork. It can be square or rectangular. If you want some of the art to span across two tiles, it needs to appear partially in the first, then proportionally on the opposite side of the tile. This is the process for making a tile manually.

Once you’ve created your final tile, make sure the square in the background has no fill and no stroke. It also needs to be behind all the pattern artwork. Drag the whole thing into the Swatches panel. You can then apply the pattern to your artwork. I prefer to do it via the Appearance panel.

Patterns we create live in the Swatches panel. But the Swatches panel contains other types of swatches, too: process colours, spot colours, gradients and colour groups. If we’re working exclusively on patterns, we can filter the content of the panel Swatch Kinds button in the panel. 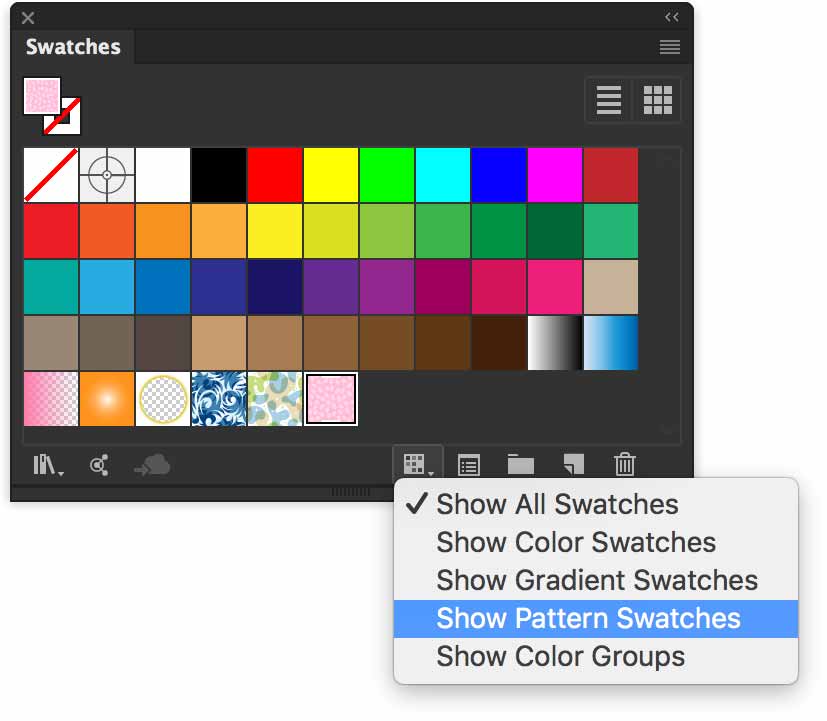 If you choose Show Pattern Swatches, that’s all that will show in the panel.

Illustrator has a built-in tool for creating a pattern. There’s a whole panel devoted to it. This is dead-simple to use. Create the artwork for one tile of your pattern. Drag it to the Swatches panel. This will automatically create a pattern swatch.

The initial artwork dimensions will dictate the tile’s size, so make that size what you want it to be before adding it to your Swatches panel. Once the swatch is in the panel, you can double-click on it to edit it in the Pattern Options panel. This is where things get interesting. 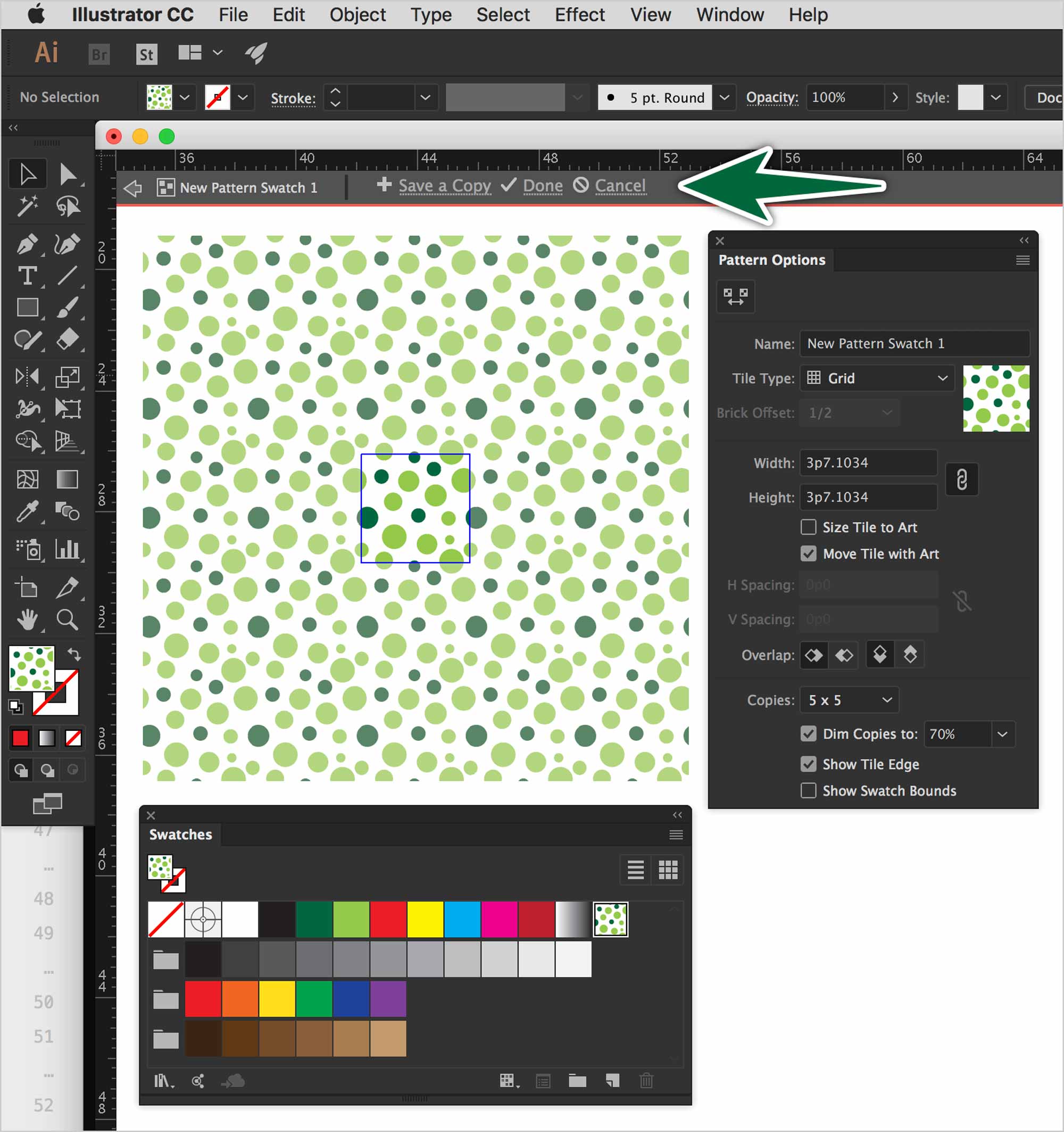 The settings here will depend on the type of pattern you’ve made. Note that you can edit the pattern, then choose Save a Copy in the isolation bar. This is really great for iterating or making variations on a pattern.

The Tile Type sets how the tiles are positioned relative to each other. 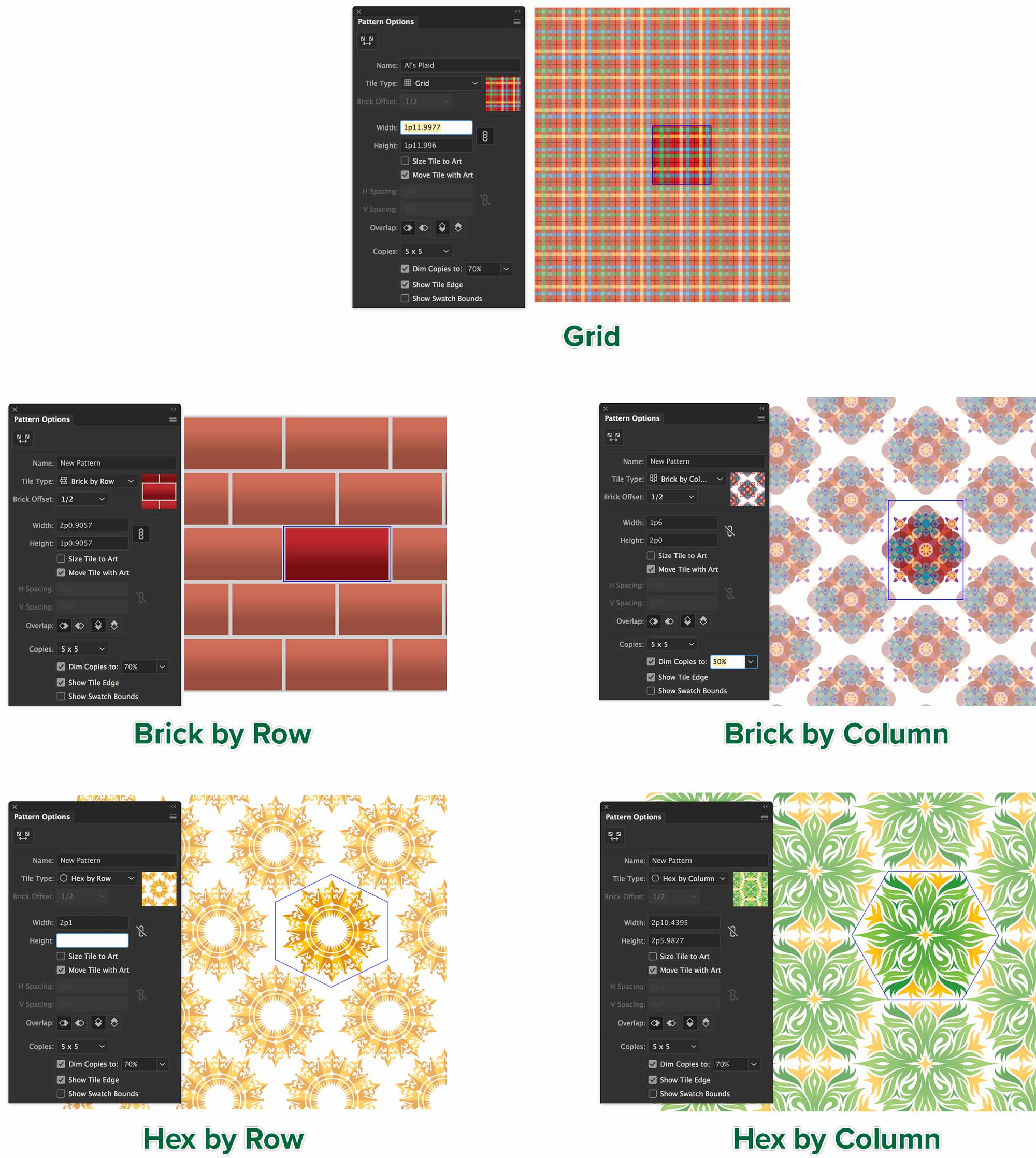 Grid
The tiles are placed in a square grid. The centers of the tiles align vertically and horizontally. This works well with square initial art.
Brick by row
Tiles are rectangular. Horizontal centers are aligned. Tiles are vertically offset.
Brick by column
This is the same as Brick by Row, but in a vertical arrangement. The tile is vertical.
Hex by column
Tiles are hexagons and arranged in columns. Tiles in the columns are aligned.
Hex by row
Tiles are hexagons and arranged in rows. Tiles are aligned.
Brick Offset
Determines the offset either vertically or horizontally, depending on the Tile Type you’ve chosen.
Width / Height
Determines the size of the tile. You can create gaps between tiles, or make them overlap.
Size Tile to Art
This attaches the size of the tile to the artwork. As you edit, if you scale the artwork, the tile will scale, too.
Move Tile with Art
Attaches the tile to the artwork. If you move the artwork, the tile moves with it.
H Spacing / V Spacing
Determines the size of the spacing between tiles.
Overlap
When tiles overlap this determines which tiles appear in front.

The bottom part of the panel has nothing to do with the actual pattern production. It sets what the preview of the pattern looks while you’re producing it. 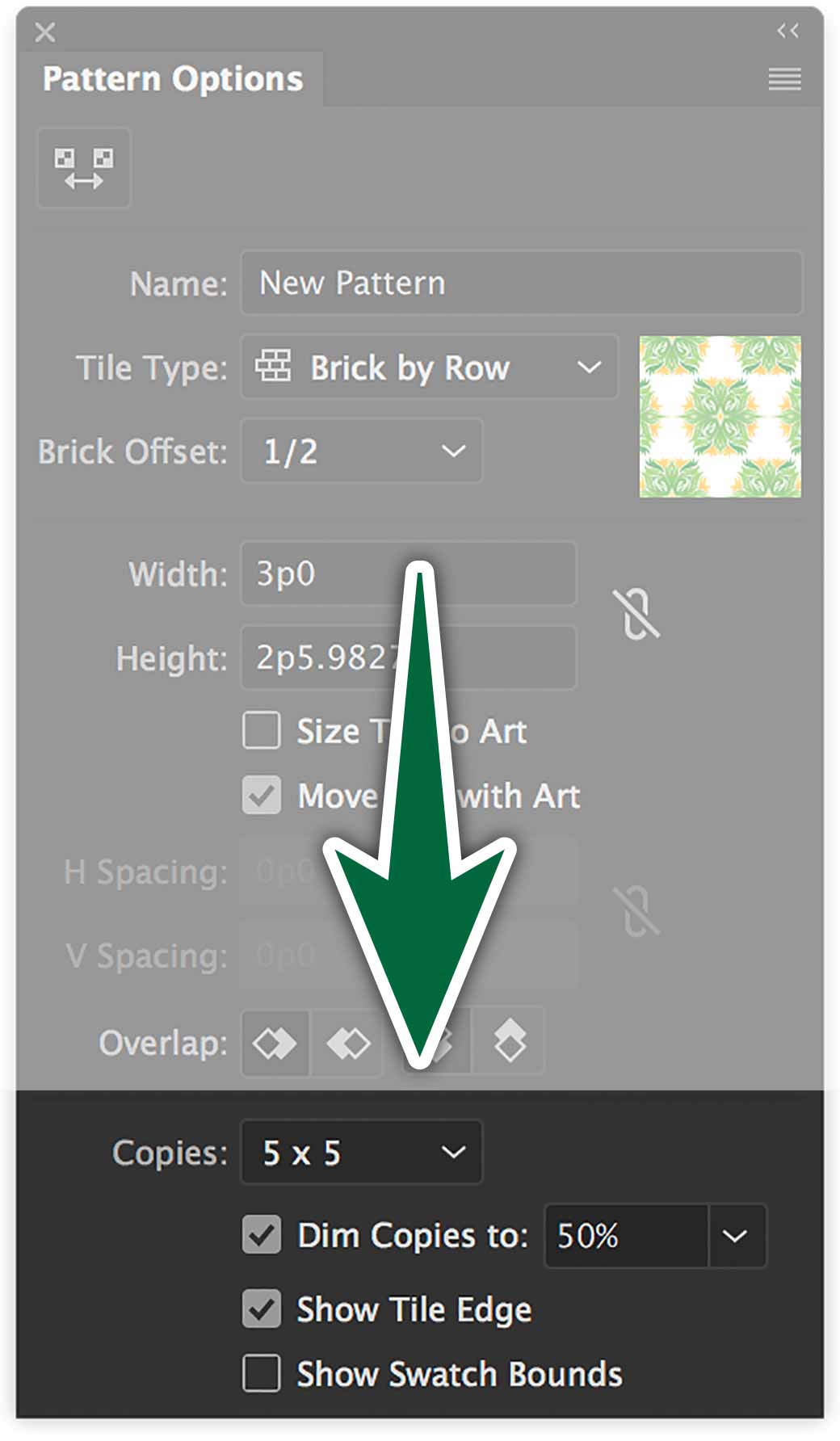 In the grey bar below the Control Panel, choose to save or discard changes to the pattern.

You can use the Make Pattern function starting from no artwork. This is pretty cool. Go Object > Pattern > Make… The panel will come up, with a tile preview on the page. Now you can draw in the square. Illustrator will generate a live preview of your pattern as you draw it. I told you it was cool.

There are two options when scaling an object that has a pattern in it. You can have the pattern scale or not. 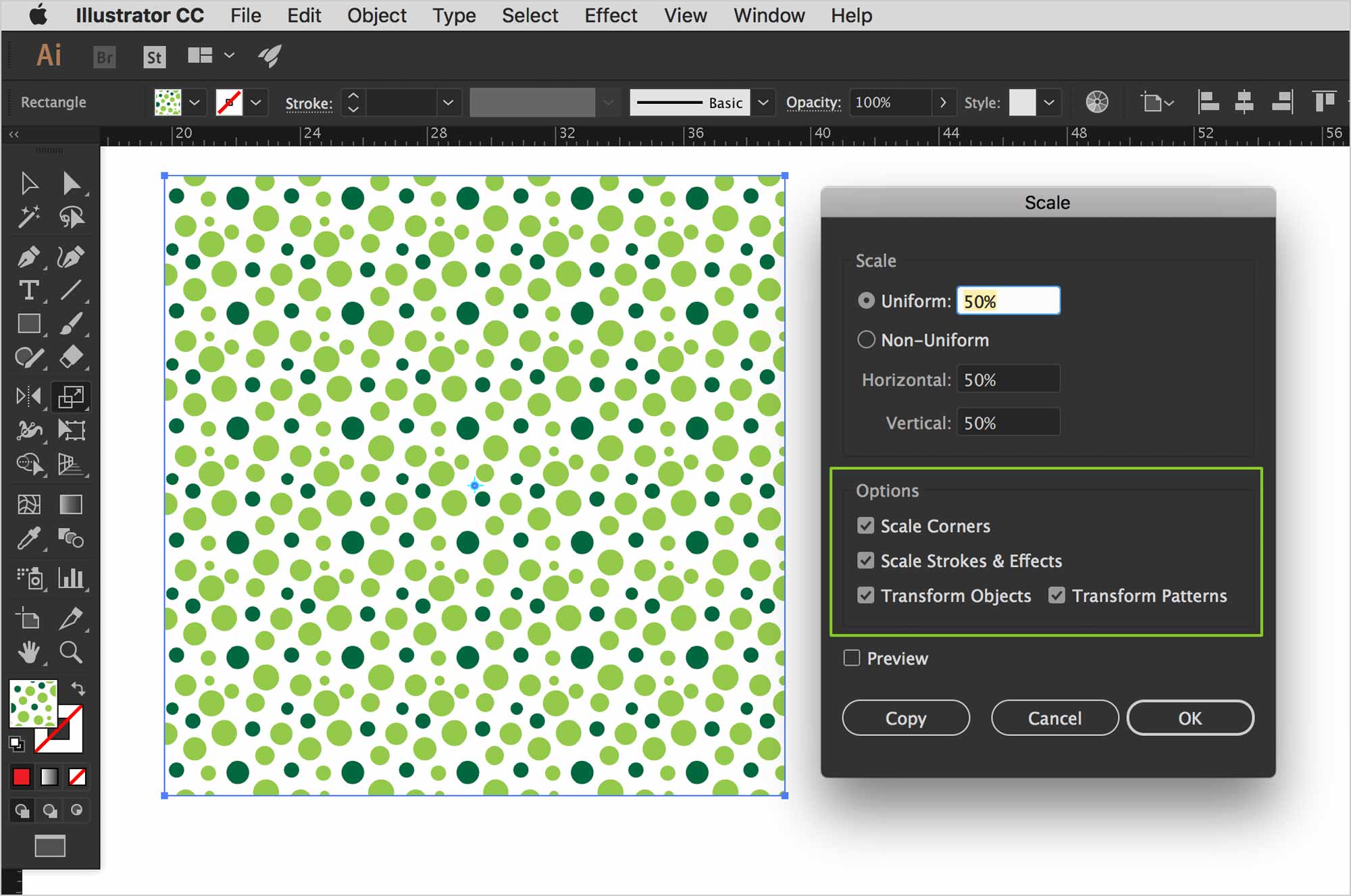 All you need to do is double-click on the scale tool. Choose the options you want. Most of the time, we want patterns to scale with the shape they’re in.

Graphic Styles are stores Appearances. So if you build an oval with a fill and two stokes, you can save that appearance in the Graphic Styles Panel. You’re not saving the fact that it’s an oval, you’re only saving its attributes. 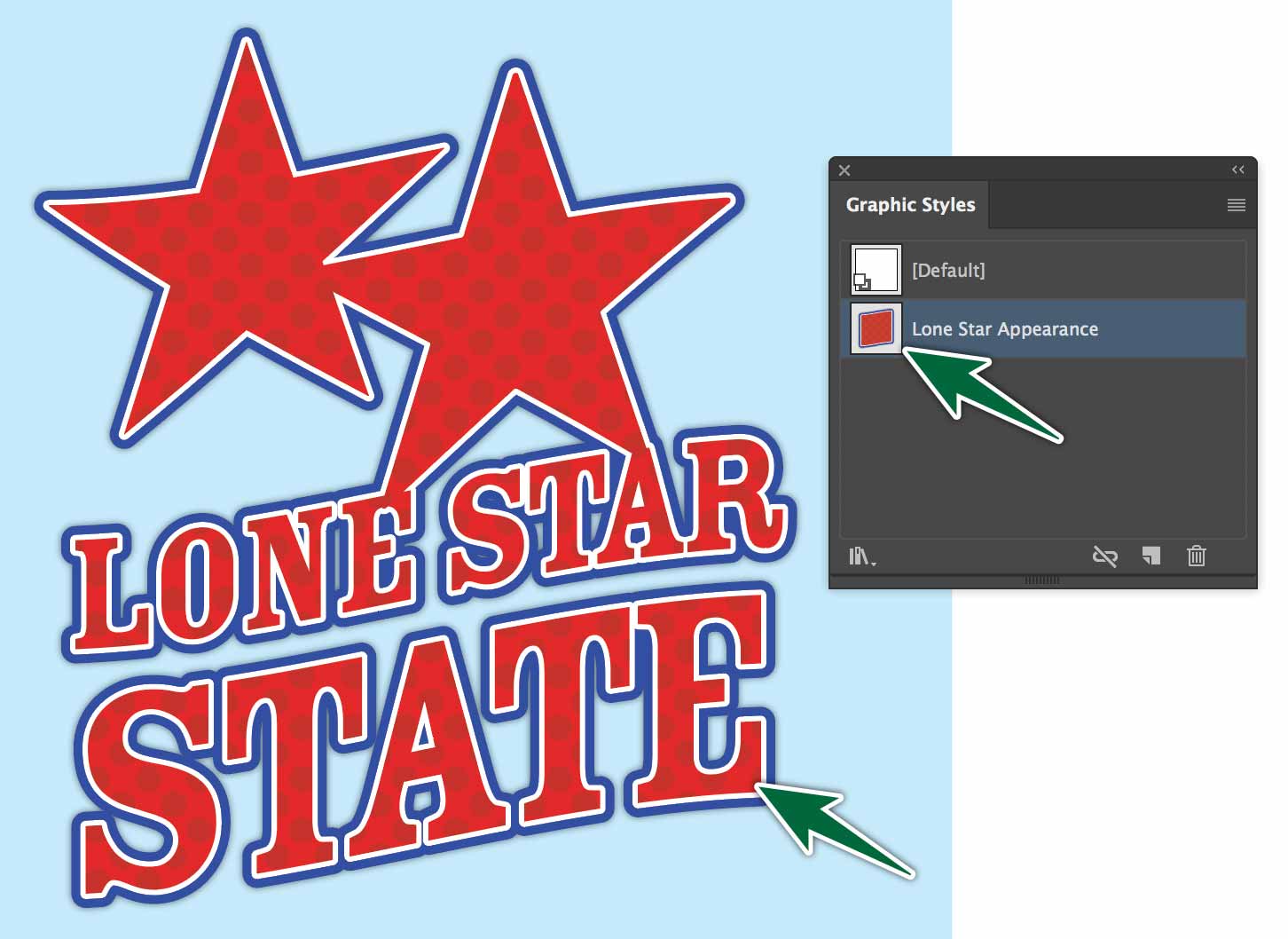 One simple way to save a Graphic Style is to select an object with the attributes you want, then click the New button at the bottom of the panel. Make sure you name your styles, so you can find them easily.

You can also drag artwork into the Graphic Styles panel. All it stores is its attributes, not the actual artwork.

To apply a graphic style, all you need to do is select the object, then click on the style in the panel.

The payoff for using graphic styles really comes when you need to edit them. You can update all instances of the graphic style on the page in one go. Just edit one instance, then choose Redefine Style from the Appearances panel menu. You can also option-drag the edited artwork’s icon from the Appearance panel onto the style in the Graphic Styles panel. 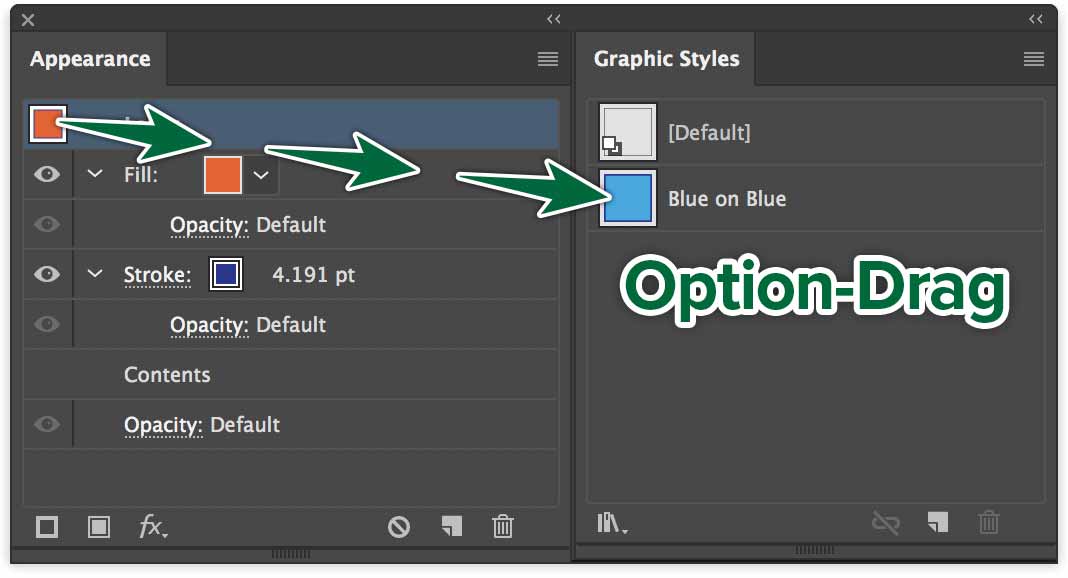 When you build an object in the Appearance panel, it can have multiple fills and strokes. Expanding objects separates the elements into the separate parts. You want to expand the appearance of artwork if you need to edit the individual parts. The important thing to remember is to expand a copy of your artwork. Keep the live art with the appearances intact.

Food identity design is a prime example of the use of stacked appearance attributes. See the examples below. See how the brand names have multiple strokes and fills with gradients? This is what we’re aiming to create.

Create your own custom food brand. Don’t use an existing name. You can create one that’s an offshoot of a name. Make the artwork unique and your own. Choose fonts only from Adobe Fonts. Create a letter-sized Illustrator document in the appropriate orientation for your brand.

Go to Adobe Fonts to activate the font for your brand. The point is to work with Appearances and Graphic Styles.

In my example above, you can see that I left progressive versions as I worked. What you need to do is keep your wordmark with all its properties in the Appearance Panel. In the end, the wordmark needed to be expanded to achieve the final look. You can do this too. Do it only at the end and only if necessary.

In your file, you may end up with only one piece of artwork, if expanding isn’t necessary. If it becomes necessary, keep a live copy and an expanded copy.

Make sure your document is named properly:

Check that there are no placed images in your Links panel. Lastly, go Type > Fine Font.... Make sure the only fonts there are from Adobe Fonts. If there are others, get rid of them.

Now, you're ready to save your file and package it. Go File > Package... and follow the prompts. You'll submit the folder named